The starters against North Texas have been named.

The Texas Longhorns declined to release a depth chart during the spring under new head coach Charlie Strong, so when the Horns finally did release the starters and back ups for the season opener against North Texas, it was the first of the Strong era. 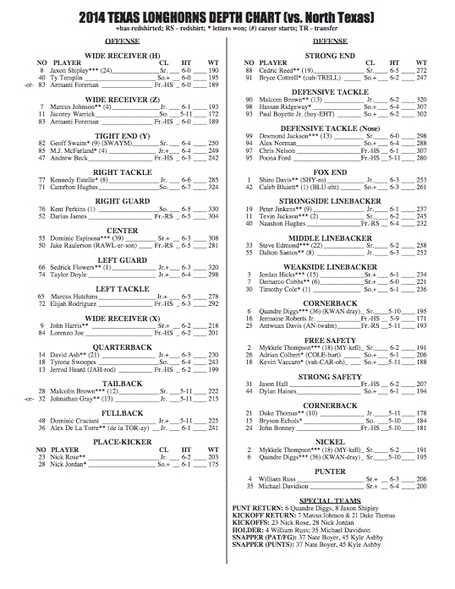 As expected there weren't many surprises, but there are some relevant notes:

-- It is a bit surprising to see junior offensive tackle Kennedy Estelle working at right tackle after it appeared that he would be on the left with senior offensive tackle Desmond Harrison apparently moving to the right side during fall camp. Will Estelle slide over when Harrison returns given the latter's struggles during the spring game at that position?

-- Who would have predicted that Marcus Hutchins would be the starter at left tackle back at the start of fall camp? He's backed up there by freshman Elijah Rodriguez, who will ideally redshirt, just to give some perspective on the depth there.

-- Sophomore walk on wide receiver Ty Templin is in front of freshman Armanti Foreman in one of only two ORs on the depth chart, so expect Foreman to see the field against North Texas. The other OR was the relatively expected one with senior running back Malcolm Brown and junior running back Johnathan Gray sharing starting duties.

-- The biggest shock on offense may be that junior walk on Dominic Cruciani is ahead of junior Alex Da La Torre at the fullback position. Of course, it may not matter much, as senior tight end Geoff Swaim may continue to work as a move blocker from the offset Pistol I, as he did last season.

-- Sophomore Caleb Bluiett has better size for the strongside defensive end position than sophomore Bryce Cottrell, but Bluiett is listed as the back up to junior Shiro Davis on the weak side.

-- Senior Tevin Jackson hasn't been completely buried, as he's ahead of redshirt freshman Naashon Hughes at the strongside linebacker position where junior Peter Jinkens is the starter.

-- Senior Mykkele Thompson is listed as the starter at nickelback, but it would be surprising to see him earn reps there over senior Quandre Diggs if North Texas opens with three wide receivers.

-- In a bad sign for redshirt freshman Antwuan Davis, true freshman cornerback Jermaine Roberts is in front of him at one cornerback position. There has been a notable lack of buzz around Davis during fall camp.

-- The answer to who will return kicks has been answered, as junior wide receiver Marcus Johnson and junior cornerback Duke Thomas will handle those duties, while Diggs and senior wide receiver Jaxon Shipley make up the depth chart on punt returns.