The good, the bad, and the downright ugly. Mostly the latter.

Share All sharing options for: Key plays: Texas vs. UCLA

Reviewing game film is never fun after a loss. And it's not meant to be.

The players must relive all their mistakes of the past 60 minutes. Every misstep, every broken tackle or broken coverage, every missed block or bad throw is up on the big screen for all to see. And yet, it's all part of the process.

So without further ado, here are some of the plays from last weekend that will likely have Strong scowling at his key players in the film room over the next couple of weeks.

The good: Nothing in particular.

The bad: Senior SLB Jordan Hicks doesn't get to his gap in time, and is caught flat-footed.

On the first play of the 3rd quarter, UCLA runs a relatively simple play: Inside handoff to the RB, who hits the A-gap between the center and left guard. The Bruins' offensive line does its job: DT Hassan Ridgeway shoots into the B gap and can't come around to the inside in time, while DT Malcom Brown is neutralized by a double-team. And just like that, Perkins is clear of the trenches and into the defensive backfield. Meanwhile, UCLA lines up 3 wide receivers at the bottom the screen and fakes a bubble screen, in order to freeze the corners and pull ILB Steve Edmond out of the middle of the field; the tactic works.

Texas counters with a zone blitz; S Mykkelle Thompson lines up at cornerback and blitzes from the top edge, while strong safety Adrian Colbert shoots towards the sideline to cover the WR. This leaves a hole in the back of the secondary, which the deep safety Jason Hall is responsible for. With Edmond in coverage, this leaves Hicks as the only Texas player covering the A gap, and the only defender in position to make the play. Unfortunately, he doesn't attack the A-gap immediately - instead he hesitates, taking a couple of steps to the left in response to the action in the backfield. This prevents Hicks from taking the angle needed to square Perkins up - he instead starts running outside to reach the gap, and is caught flat-footed when Perkins cuts back inside and motors through his arm tackle.

Perkins shoots into the secondary, gaining a first down. At this point, the next line of resistance is Jason Hall - the only safety in deep coverage. However Hall is out on the 3 wide receiver set, and takes a bad angle on Perkins as he comes over to the middle. Perkins changes tack, and Hall can't recover in time. The result? Another missed tackle, a huge gain for UCLA on the first play of the 3rd quarter, and a massive momentum swing.

2. Tyrone Swoopes sacked by UCLA NT Eddie Vanderdoes for a loss of 8 yards to the Texas 34 [1st quarter]

The good: The tackles manage to hold their own, and Swoopes isn't injured on the play.

The ugly: Junior LG Sedrick Flowers looks like he has no idea what's going on.

These are the plays that kill drives.

1st down and 10 at midfield. Early in the 1st quarter, the Longhorns had manged to grind out two first downs in typical West Coast fashion - a series of punishing runs, with short passes to Shipley and Marcus Johnson mixed in. With the Longhorns sitting pretty, Watson decides to try and open things up and calls for a deep downfield pass. Shipley and John Harris are sent deep, while TE Geoff Swaim runs a seam route. Meanwhile, M.J. McFarland and Malcolm Brown run shorter routes.

Unfortunately, the play never develops as planned - Swoopes is almost immediately hit in the backfield by Eddie Vanderdoes, part of a four-man front UCLA sends against the offensive line (while dropping the remaining 7 into short/intermediate coverage). The collapse of the O-line is quick, and painful to watch; Vanderdoes steamrolls center Jake Raulerson in a couple of seconds, while RG Taylor Doyle is beaten less than a second later. With the exception of RT Kent Perkins (who didn't have that great a day either), the entire Texas O-line crumbles in the face of... two defensive tackles, an end, and a linebacker. Not looking good, guys.

Upon closer examination, the first critical error is made by Sedrick Flowers. Flowers and Raulerson were likely supposed to double-team Vanderdoes and sandwich him in front of the A-gap, while the rest of the O-line dealt with their respective assignments. Alternately, Flowers could have reached out and given an initial push on Vanderdoes  (similar to what Raulerson does to Doyle's assignment right after the snap) before picking up a blitzing linebacker (of course, there was none on the play). However, he ends up whiffing - Vanderdoes crosses Flowers' face in an instant and goes straight into the A gap, while Flowers is left punching at thin air. Raulerson does his best, but ultimately trips on Doyle's leg and falls by the wayside. And there you have it - a broken protection scheme, a loss of 8 yards, and a QB flat on the ground.

Readers should pause before assigning undue blame on Raulerson for this play - after all, he is a redshirt freshman with a ways to go in terms of strength and weight gain. Nevertheless, the lack of cohesion in the O-line will be a major area of improvement over the bye week, and hopefully such breakdowns will be a thing of the past when Raulerson and Flowers line up against Kansas in two weeks' time.

The good: Perkins and Swaim set the right edge effectively, manhandling the outside end.

The bad: Flowers (the pulling lineman) whiffs on the outside linebacker. Ultimately inconsequential.

The ugly: This play should never have happened; UCLA's D-line was perfectly set to blow up the counter, and neither Swoopes nor Raulerson made any pre-snap changes.

The first nail in the Longhorns' coffin.

2nd and 5 at the 30-yard line. 4 minutes left on the clock. A 4-point lead. All Texas had to do was gain a couple of first downs, and the game was likely theirs. Only one problem - we were running a hurry-up offense. And in the rush to get to the line and call the next play, our offense became predictable. And that was the beginning of the end.

The play call from upstairs was a counter right, a play that the 'Horns had run multiple times throughout the game with varying degrees of success. Against a four-man front (one tackle, two ends, one linebacker) the scheme was simple - LT Marcus Hutchins would pick up the linebacker off the edge, Raulerson would come down from the center position to block the right end, RG Taylor Doyle would block down onto the nose tackle, and RT Kent Perkins would block out the left end with support from Swaim. The result ? A good-sized hole in the B-gap (through which Sedrick Flowers is pulling) and a nice gain for Brown, setting up a third-and-short at worst.

Problem was, UCLA anticipated the play perfectly. Right before the snap, NT Eddie Vanderdoes and the right end both shift downward - overloading the left side of the line. By shifting to his right, Vanderdoes prevents Raulerson from blocking back on the right end. With Flowers pulling to the right, this leaves said end completely unblocked with a free shot at Brown. 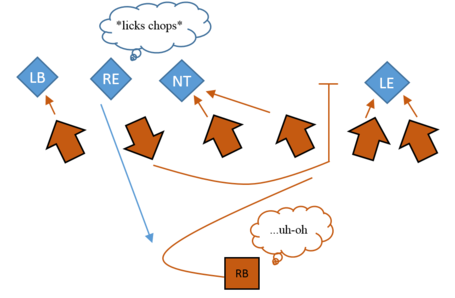 Of course, Sedrick Flowers' missed block at the end of the play only adds insult to injury.

So who's to blame? At first glance, this seems like an instance of poor playcalling - risking a big yardage loss by mis-identifying the defensive front. In this situation, the onus is on Swoopes to audible out of this play (perhaps into a zone read, with the LT taking on the RE instead?) after seeing the overloaded left side. Perhaps in the rush to get the next play off, Swoopes and Raulerson didn't make the adjustment? That's a possibility. At any rate, these sorts of play-calling instincts will come with experience. As the line captain, Raulerson could also have called a blocker into motion from the right side of the line as a last-second effort. Again, such calls will come with time in the film room. Notice a familiar trend?

Note: Credit goes to user Needs More Bourbon and the good folks of ShaggyBevo for this wonderful insight.