Tom Herman stuck with Sam Ehlinger, and that decision produced a star

When the sophomore quarterback struggled against Maryland, some wanted a quick change. The Texas head coach stuck the course and it was the season’s most important decision.

Share All sharing options for: Tom Herman stuck with Sam Ehlinger, and that decision produced a star

“I don’t have any doubt he has what it takes.”

Texas Longhorns head coach Tom Herman’s sentiments following the season-opening loss to the Maryland Terrapins likely weren’t echoed by many, but that mattered not because, well, the Horns head coach was right — Sam Ehlinger has what it takes.

That’s obviously easier to say in hindsight with Texas still just days removed from capping a 10-win campaign with a convincing, Ehlinger-led Sugar Bowl win over No. 5 Georgia. But in early September, amidst clamors for change at quarterback, Herman and his staff had to look beyond what the massing were looking directly at — yet another turnover-plagued performance, which, of course, led to a loss.

In a theme eerily resemblant to 2017 losses to Texas Tech, Oklahoma State, and even USC, late turnovers by Ehlinger stole headlines following the loss to the Terps. After the newly-minted starter completed 15-of-25 attempts for 213 yards and two scores, the hopes of a 1-0 start to the season withered away as Ehlinger struggled down the stretch, tossing two interceptions and completing fewer than 50 percent of his passes throughout the final seven minutes. Such a showing marked the second time Ehlinger had pitched a pair of fourth-quarter picks in just three appearances — he did so in the 2017 regular-season finale loss to the Red Raiders as well. 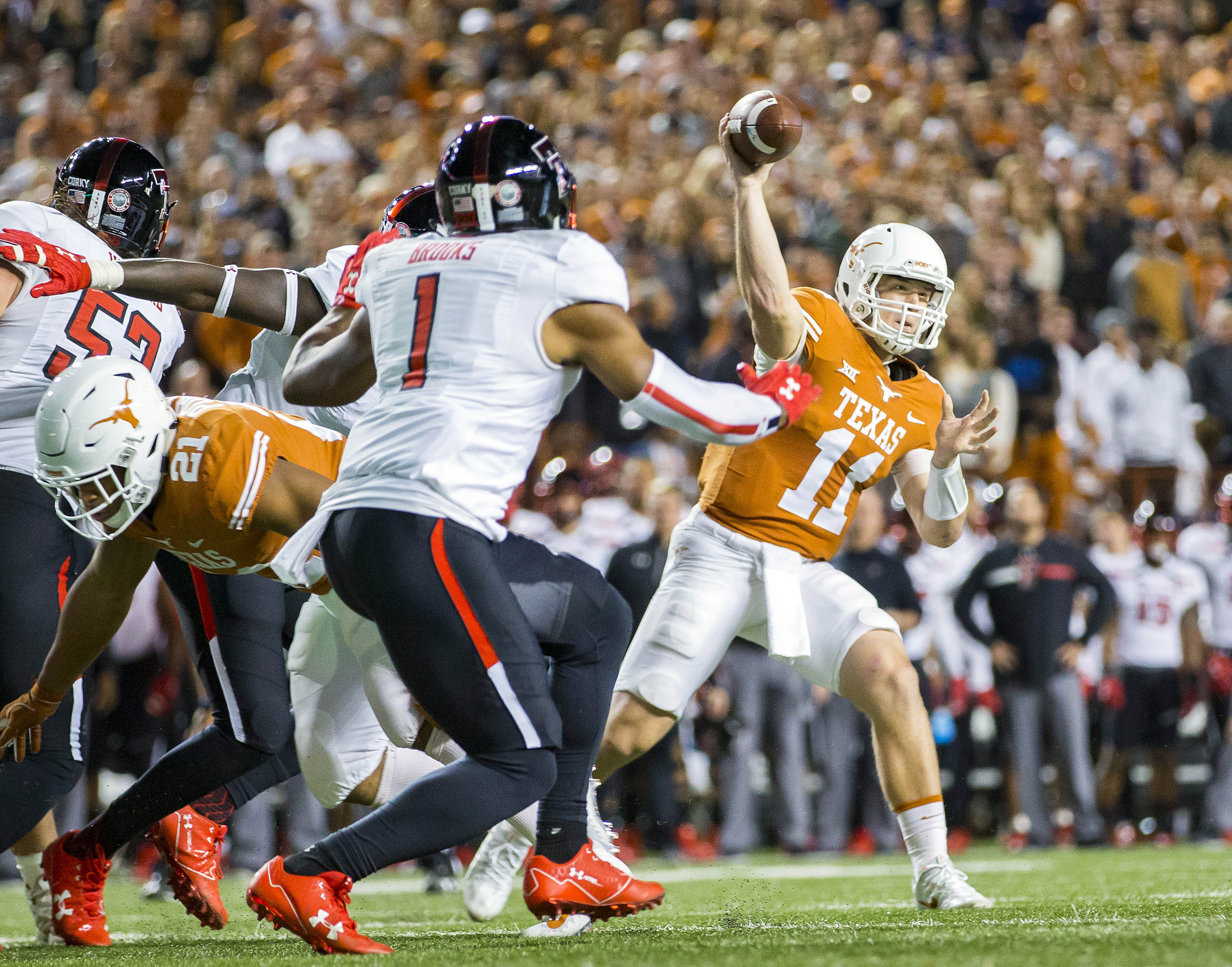 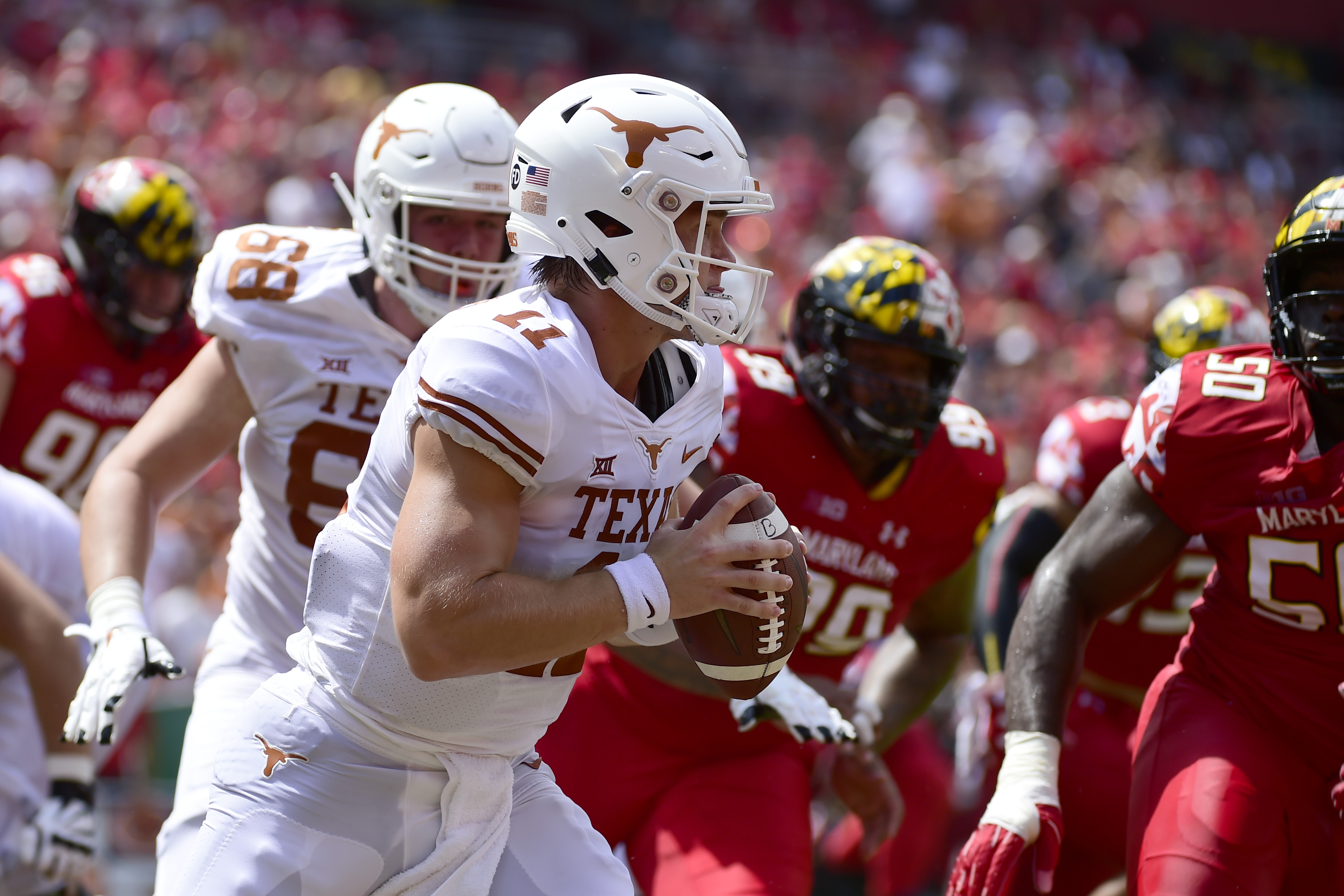 Suddenly, Ehlinger’s record as a starter regressed to a paltry 2-5, but nevertheless, Herman elected to stick with him as the starter, despite his showing against Maryland.

“Certainly Sam didn’t play perfect, but nobody did, and his errors weren’t egregious enough to merit just dumping him on the depth chart,” Herman said just days after the Longhorns loss to the Terps.

Following a back-and-forth quarterback competition throughout the entire 2017 slate and on into spring, Herman sticking with the sophomore despite such an unsavory showing to open the 2018 campaign was the kind of decision that can catapult a young passer’s confidence.

Ehlinger certainly agreed to that end.

“Yeah, absolutely,” Ehlinger said ahead of the Sugar Bowl when asked if Herman sticking with his as the starter after the Maryland game improved his confidence, via Brian Davis of the Austin American-Statesman. “When the decision was made that I was his starter and the team’s starter and that I didn’t need to worry about any of that, it just implies so much confidence. From a preparation, from a performance, from a leadership standpoint, everything changes.”

For Ehlinger, and thus, the Longhorns, everything did change.

The sophomore gunslinger didn’t have another pass picked off until the regular-season finale win over Kansas, capturing the school and Big 12 records for most consecutive attempts without an interception (308) along the way. Throughout that stretch, statistically speaking, Ehlinger outperformed USC’s J.T. Daniels, Oklahoma’s Kyler Murray in the Red River Showdown, and West Virginia’s Will Grier in head-to-head match ups, just to name a few. Far more notably, though, Ehlinger guided the Longhorns out of the quarterback wilderness and on to nine regular season wins, a Big 12 Championship appearance, and of course, a New Year’s Six Bowl berth.

Each of the aforementioned feats felt fairly far-fetched following the Longhorns second consecutive loss to Maryland, but, of course, they’ve each since come to fruition, largely behind Ehlinger’s emergence not only around the Forty Acres, but onto the national stage.

“His maturation has been phenomenal,” Herman said of Ehlinger prior to the Sugar Bowl. “You’ve watched the guy. If there’s a more improved quarterback from freshman to sophomore year this season, I’d like to meet him. Sam has completely elevated his game. He’s a different guy, and I think that speaks a lot to continuity, too, with this being the first time in five years I believe where Texas has had the same offensive system for back-to-back years.

“So he feels very, very comfortable in the system. He makes checks that sometimes we haven’t even talked about through the week of preparation. He just understands the offense. And he sees defenses as good as I’ve coached. And then his physical toughness is something that the players really, really rally around.”

Ehlinger’s ascension only continued at the Sugar Bowl.

Pitted against a Georgia defense that was maybe the best Ehlinger had seen thus far, on a stage maybe bigger than any he’d experienced thus far, the sophomore rose to the occasion in sensational fashion.

Though his passing numbers weren’t eye-popping, as he totaled only 169 yards, Ehlinger was tremendously efficient slinging the pigskin, completing 70.4 percent of his attempts against a defense that entered the game ranked No. 3 in passing defense S&P+. Ehlinger’s impact in the ground game, however, is what gashed Georgia. On a season-high 21 carries, Ehlinger compiled 64 rushing yards — his second-best effort of the season — and powered across pay dirt for each of Texas’ three touchdowns.

In doing so, Ehlinger cemented himself in Longhorns lore as one of the greatest to quarterback in burnt orange and white.

In a similar light, Ehlinger’s 3,292 passing yards as a sophomore now stand as the fifth-most in any single season in school history, with only McCoy (2007, 2008, 2009) and Major Applewhite (1999) putting forth more praiseworthy passing performances.

The fruits of those labors? A Longhorns program that is, at long last, once again competing for conference championships and celebrating 10-win campaigns; a program that, as the ever-confident Ehlinger put it, is back.

Sam Ehlinger has a message for Texas fans pic.twitter.com/zWmYYHCV5V

“When he said that, I was like keep saying it. That’s the confidence this man exudes to the offense and to the whole team, and I’ve commended him so many times,” senior defensive end Charles Omenihu said of Ehlinger’s “We’re baaack” proclamation. “And I’ll commend him again for just being the guy he is and the way he is because it’s really been transcending and inspiring to everybody on this whole team and the whole university.”

Omenihu’s post-Sugar Bowl praise for Ehlinger is likely something few could have foreseen coming to fruition following that disheartening loss to Maryland; a point at which the seemingly unending quarterback competition appeared to be anything but finished.

Since those confidence-instilling sentiments in early September, the Longhorns have won 10 of 13 games with Ehlinger at the helm — backup Shane Buechele did lead the Longhorns to wins over Baylor and Iowa State as Ehlinger battled a shoulder injury — including a school-record five ranked victories.

Furthermore, for the first time in a long time, Texas enters the offseason unencumbered by a quarterback controversy. The Longhorns, at long last, have a budding star at quarterback who will enter 2019 as the most proven passer in the Big 12 with favorable odds to emerge as the best in the conference.