'Horns appear to be in strong position for Teuhema brothers

Texas could be close to landing another Pacific Islander in the 2014 class, as well as his big little brother.

Share All sharing options for: 'Horns appear to be in strong position for Teuhema brothers

One of the under-the-radar offers that went out to a 2014 prospect at the first-ever Texas Sophomore Day in late March was the one extended by the Longhorns to Keller (Texas) defensive end Sione Teuhema.

The invitation to come play in Austin went hand-in-hand with the offer to Sione's younger brother, Maea, also known as Tristan, a 6-5 offensive line prospect listed variously as between 335 and 348 pounds. The younger Teuhama is ranked as the no. 14 player in the state in the first 2015 LSR and carries his weight remarkably well for a player of his size.

Where some offensive line prospects aren't impressive in compression gear at combines, Tristan looks the part and may even be able to play tackle at the next level despite his weight, an ability that is extremely rare. 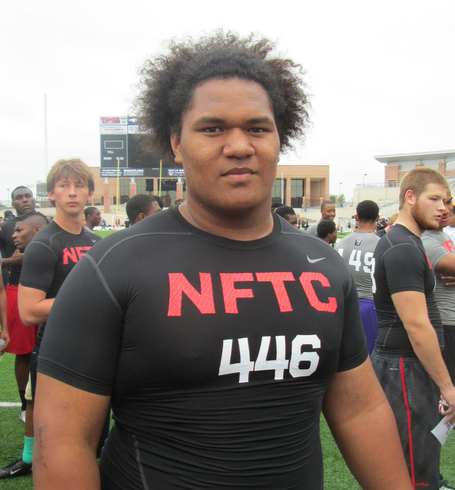 Unlike some package deals between friends and teammates that never work out, Sione and Tristan are truly a package deal -- they will commit together to the school of their choice around the time when their high school lets out for the summer.

Only schools that have offered both are in serious contention, with the Longhorns perhaps leading the list, as 247Sports recruiting analyst Gerry Hamilton has predicted that Texas will come out on top for both in the new Crystal Ball feature that debuted on Monday.

After the visit for the Sophomore Day, Tristan relayed to 247Sports that his older brother is high on the 'Horns ($):

The whole time we were there [Sione] was saying we should go here. He just kept saying that we should go to Texas. He's basically choosing my college for me, and we both really like Texas.

At the time, the top three for the brothers included the Longhorns, Oklahoma State Cowboys, and TCU Horned Frogs, but the other two schools may have lost some ground in recent weeks with other programs extending offers to the brothers.

One program that missed an opportunity is Texas A&M. The two visited on April 10th and Tristan picked up a full offer, but the Aggies only deigned to extent a grayshirt opportunity to Sione with other targets ahead of him on their board, including star defensive Myles Garrett, whose older sister attends school in College Station. Katy Seven Lakes product Jarrett Johnsn is another target and he has the Aggies as his leader with time winding down before he's expected to end his recruitment in favor of A&M.

According to the guardian for the brothers, the Aggies seriously hurt their chances with the two ($) by making that decision.

That may leave the LSU Tigers as the serious competition for the Teuhema brothers. Sione received his offer from Les Miles and his staff on the 13th and the two were supposed to visit LSU over the weekend, though it's not clear whether or not that visit happened.

The Oklahoma Sooners are also in the mix, having received a visit from both in early April.

As the Longhorns look to add another edge rusher in the 2014 class, Sione looks like a strong fit as a player with an excellent first step in that regard, though he will have to add a significant amount of weight to hold up against the run in college.

However, his upside and desire to play with his brother in college made the offer pretty simple for the Longhorns and it could pay off in the near future with big commitments from both.