The Narrative: Charlie Strong staves off disaster with 2014 Texas class

For the moment, the new paradigm in Texas recruiting is "Not as bad as it could have been."

Share All sharing options for: The Narrative: Charlie Strong staves off disaster with 2014 Texas class

As the Texas Longhorns suffered numerous decommitments and fell in the recruiting rankings during the race to Signing Day, new head coach Charlie Strong and his assistants did manage to add several key pieces to the class, leaving a feeling on Signing Day that while things hardly went spectacularly well during the first several weeks on the job, it could have been much worse.

Amid the excitement of a new regime and a new direction with new energy, there's an overwhelming sense that considering the worst-case scenario for the 2014 recruiting class is the best way to conceive of the group in the aftermath of National Signing Day, all while trying to maintain some optimism for the future and the following class.

What Jerrod Heard means for the Longhorns

Tracing the evolution and accolades of the potential future at quarterback for Texas, Denton Guyer dual-threat Jerrod Heard.

Putting together the best of the Big 12 from the 2014 recruiting class as the Sooners surged past the Longhorns late.

In regards to the worst-case scenario, keeping top-rated commits Jerrod Heard, the quarterback from Denton Guyer, and Derick Roberson, the defensive end from San Antonio Brennan, was extremely key. Not to mention top-rated defensive back commit John Bonney and Under Armour All-American cornerback Jermaine Roberts. Bonney visited Auburn and Baylor, while an unofficial visit to Austin convinced Roberts not to take a planned trip to Ohio State.

Strong spoke on National Signing Day about what he felt like he and his staff accomplished in the few short weeks they were on the job before the most important yearly date on the recruiting calendar.

"It's been a very intense couple of weeks and what we were able to do, as a staff was we wanted to keep this class together and it was an outstanding class," Strong said. "And then we were able to add a few players ourselves by our guys going out, but it was key for our coaching staff to get within the state and develop a relationship, not only with the new recruits that we were signing, but also with the high school coaches here."

By those standards, there was certainly more than a modicum of success achieved.

The other positive for Strong is that while some fans feel there were some questionable takes in the class, he didn't view any of the commits that way when he arrived.

"I didn't feel like my hand were tied at all," Strong said. "I know that Coach (Mack Brown) had built a great program here and he has built it the right way. I knew the players that had committed to him were outstanding players and outside of that, outstanding people and that's what you look at."

"I didn't feel like my hands were tied at all because I know this -- that we were able to go out and recruit some ourselves. It's so hard because when you go out and make a coaching change, you go out and try to get back in the mix with some of the players that have gone out and committed someplace else. They really don't know who you are. It's best to hold on to what you got rather than go out and look for something else."

Aided by the benefit of hindsight, however, the early recruiting efforts of Strong were tied into the final days of the Mack Brown era, as the former Texas head coach tenuously tried to hang onto his job, managing to avoid the critical meeting with athletic director Steve Patterson and president Bill Powers until the day of the football banquet.

Last December, however, those official visits ended up setting back Strong significantly, as his attempts to get committed players on campus were much more difficult since the official visit to Texas had already been burned. 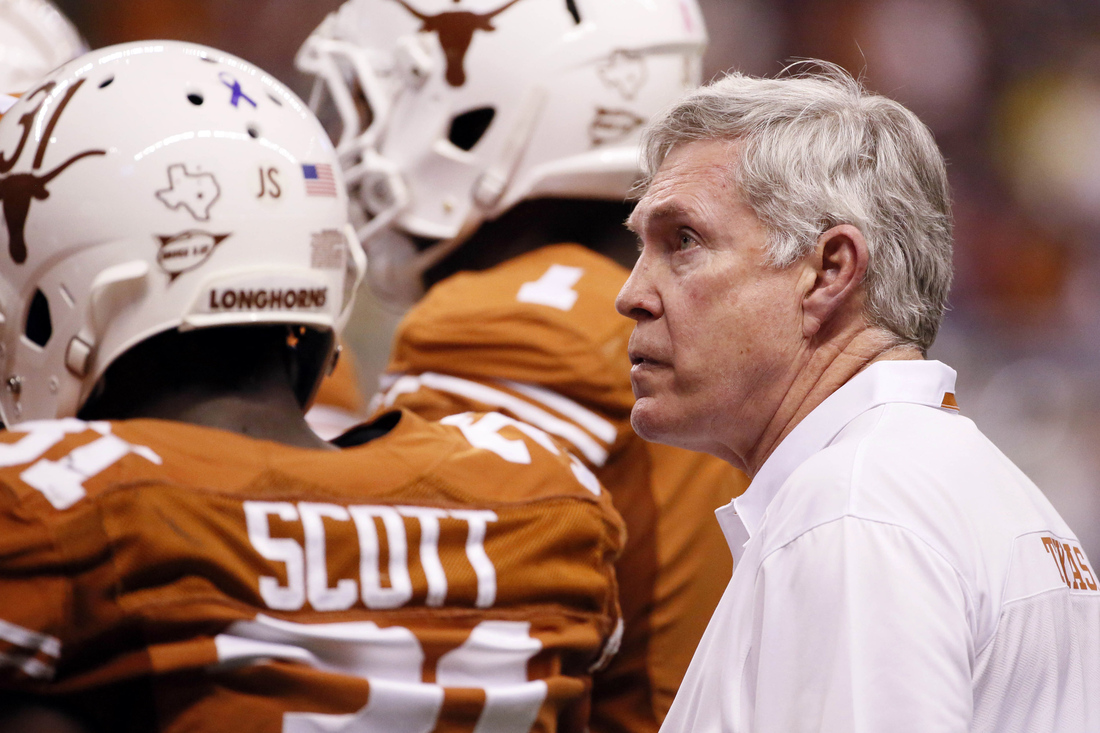 And the recruits who did visit were thrown into a maelstrom of speculation and unease as the Mack Brown era breathed its final gasps. Instead of the unity of the Texas program being on display, as it generally was at the football banquet with the recent exception of former wide receiver Darius White bad-mouthing the program to blue-chip recruit Dorial Green-Beckham, it was rather the fractured nature of the program as various forces attempted to pull it in different directions.

Frankly, it was just a really bad time for the recruits to be in town, as the banquet itself was an extremely awkward affair that offered no clear answers about the future.

Brown hadn't met the expectations that he had set for himself and the program in 2013, then failed to do the program the service of stepping aside quickly and gracefully, leaving the official visits for the next head coach. Instead, he continued as if it were simply business as usual, which it mostly certainly was not.

The importance of relationships

Texas fans have wondered what happened with the close of the class, as the Longhorns suffered a handful of decommitments, losing all three defensive tackles in the class, wide receiver Emanuel Porter, linebacker Otaro Alaka, and defensive end Sione Teuhema, as well as a handful of 2015 commits, including Sione's younger brother, five-star offensive lineman Maea Teuhema.

Why wasn't Strong able to better sell himself and his assistants and his new direction for the program? Why had some prospects committed to the former coaching staff instead of truly committing to Texas?

The answer is a simple one.

"It's not so much reselling the University of Texas, it's more selling ourselves," Strong said on National Signing Day. "It's all about relationships and they didn't really know us. I think we lost two of them (commits), I don't really know how many we really lost. But just knowing this and when a new staff comes in, a recruit has to be comfortable with you and that's why it was so critical for us to go in and see every recruit that we did sign here."

For further evidence other than the recommits, consider that star safety Jamal Adams dropped Texas as soon as Mack Brown resigned and star defensive end Solomon Thomas did the same in January without even visiting Austin to see the new staff.

Kevin Sumlin and his staff at Texas A&M had been working on Alaka for so long they were finally able to allay his concerns about College Station being a boring place. And that apparently took some serious, long-term effort.

Texas was able to get Alaka and the Teuhema brothers on campus before they decommitted, but part of the appeal of a big official visit weekend is to get all the recruits around each other.

Class leader Jerrod Heard came down for the last weekend before Signing Day to do exactly that with wide receiver Lorenzo Joe visiting after a trip to TCU and then-Colorado commit Elijah Rodriguez on his official visit prior to the offensive tackle switching his pledge.

Strong also believes that new coaches deserve a little bit of help from the NCAA in terms of having an opportunity to sell themselves when they arrive.

"I sometimes think about this, and I'd like to see this happen and I'm not working for the NCAA but I'd like to say this: in a situation like this, if a coach leaves in the middle of recruiting and a guy has made a visit and they have a visit left because they get five, they should be able to come back and use one of those five to visit with the staff on campus," Strong said on Signing Day.

"Now they can really find out who you are and sell them again and give them a chance. If they visited in November or December and then everyone else starts recruiting them, they remember the last guy that they spoke with and that happens a lot. We weren't able to do that and get them back on campus, so we had to go and re-sell ourselves and go to their home and give them the hour or however long they had to sit down and convince them. You also have to convince their high school coach about who you are and what you are all about."

About that whole committing to a school instead of a coach? Well, it seems that Anderson mostly committed to a coach, as he was ready to switch his pledge from Arizona State to Oklahoma State before Wickline made the move. With Rodriguez, the decision was more about his family ties, as he didn't have a significant prior relationship with the former Oklahoma State offensive line coach.

The two prior commitments were pure commit-to-the-progam moves, as tight end Blake Whiteley committed just after Strong was hired without knowing anything about the offensive coaching staff -- he waited only three days after the official announcement of Strong's hire to become a Longhorn. 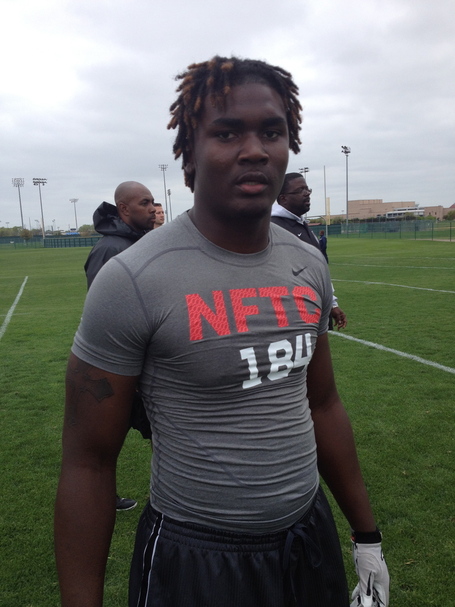 Safety/outside linebacker Edwin Freeman chose the Longhorns just as the dead period of recruiting ended -- only a brief meeting with Strong was necessary for him to chose his childhood favorite over the Aggies, helping preemptively reduce the impact that would eventually be felt from the defection of Alaka.

Then the big fireworks happened on National Signing Day. After inking only one prospect on that day during the last decade, Strong was able to fill his defensive tackle class with pledges from Poona Ford and Chris Nelson, both former Louisville commits. After missing entirely on defensive tackles in 2013, doing so again in 2014 would have been a disaster, one that Strong managed to avert because of his ability to build relationships with Ford and Nelson that survived a change in address.

The next step for Strong, besides developing the talent that he was able to land in this class, which mostly filled the needs across the board, especially with the additions along the offensive line and at tight end down the stretch, is to prove that his success building relationships with the two former Louisville commits who ended up following him to Texas can happen across an entire class.

So now the real work begins, as the assistant coaches and Strong continue to build and foster relationships with the 2015 prospects and their coaches in what should prove to be a critical class for the program's after two classes that were ultimately regarded as not nearly as good as they could have been.

We are the University of Texas

There is some good news for Strong and his staff.

"We are The University of Texas and this is the state of Texas so when we walk in the door is going to be open for us," Strong said.

As much as Texas A&M might like to call themselves the fighting Texas Aggies and as much as they might win be winning recruiting battles at the moment, there are several truths that the Aggies cannot overcome.

"We're still the University of Texas. We will always be the flagship university of this state."-- Charlie Strong

"We're still the University of Texas," Strong said. "We will always be the flagship university of this state. It's hard to try to keep guys in, but you have to go recruit them and not be afraid to go battle those Southeastern Conference teams, whomever they may be.

Once they get in the door, they're going to have to do some work to catch the Aggies and keep top in-state defenders from bailing for the SEC -- no small task since the cachet of the league has never been higher.

Once again, there are some BBs that need to find the boxes in which they reside and the stakes are the future of the Texas football program.