One of the top defensive tackles in Texas in the 2016 class once again has an offer from the Texas Longhorns, as the staff informed Houston Westfield's Ed Oliver on Friday that he still has an open invitation to join the Texas class. 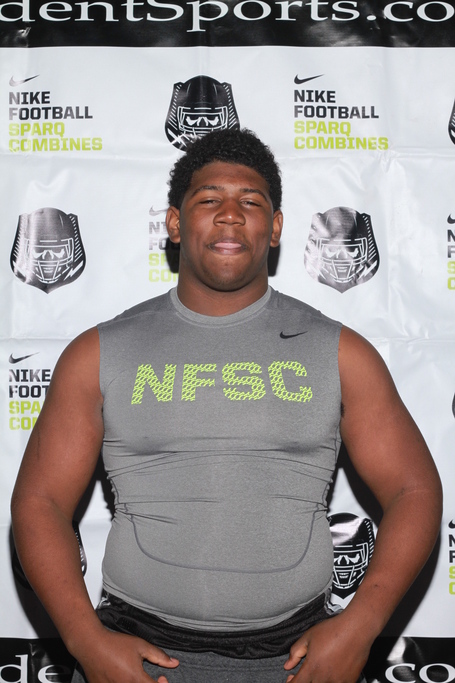 The defensive tackle has significantly cut his body fat in the last year.

The Longhorns had originally offered the Westfield product back in December, at which point a prediction for Texas came in from 247Sports recruiting analyst Brian Perroni in the 247Sports Crystal Ball.

Rated as a consensus four-star prospect, the 6'2, 270-pounder is a lean, mean, gap-penetrating machine ranked as the No. 10 defensive tackle nationally and the No. 9 player in the state of Texas in the early going.

All of his current offers are from Big 12 schools -- Oklahoma, TCU, and Texas Tech -- meaning that his recruitment is not particularly far advanced despite the fact that he is well-considered by 247Sports.

As the photo from a SPARQ Combine in 2013 illustrates, Oliver has spent the last 15 or so months trimming down to the point where he is now carrying little to no bad weight, which has helped with his quickness off the ball and allowed him to run a 4.87 40 at the Houston NFTC back in early April.

TexAgs recruiting analyst Brice Jones was at Westfield on Tuesday and provided some footage of Oliver in practice:

As a sophomore, Oliver registered 62 tackles, 14 tackles for loss, and recovered one fumble.

Oliver plays the three technique for Westfield, his likely position in college unless he continues to stay lean, in which case he might be a better fit as a defensive end in a 3-4, though he's probably quick enough at this point to also play as a 4-3 defensive end with an emphasis on stopping the run on the strong side.

Capable of quickly crossing the face of an offensive lineman from one gap to the other on film, Oliver has a tremendous first step and can also roll out his hips to create a great deal of force with his hands. Likewise, he can sink and explode through offensive players as a tackler. Seeing him turn and make tackles down the field or sideline to sideline in pursuit provides evidence of his motor and his top-end speed, which is impressive for his size.

However, he'll have to continue getting stronger and improving his lower body strength because he can get pushed off the ball by double teams or when he plays high against stronger players. When he does keep his pads low, it becomes much more difficult for opponents to displace him, especially because he does typically do a nice job of shooting his hands with power.

And since he probably is closer to 6'1 than he is to 6'2, he's a bit undersized for the position, like fellow Westfield alum and current Longhorn Desmond Jackson, who has perhaps been limited somewhat in college by his lack of ideal height. It won't keep Oliver from potentially contributing in college, but it could limit his upside.

Still, his athleticism and some of his other raw tools like his strong hands make him a no-brainer offer and an easy take if he wants to commit.

Texas has now extended two offers to in-state defensive tackles. Killeen Shoemaker's Kendell Jones has also held an offer for some time and the Horns are thought to be in strong shape to eventually land his services.