The Horns have returned to the pipeline school.

For more than a decade, the Texas Longhorns have landed players from Houston-area Galena Park North Shore high school and returned on Tuesday evening to offer offensive guard Tyler Moore.

The 6'4, 335-pounder teased that he had some news coming from his "dream school" and then revealed a short while later that he had picked up his offer from the Horns. In the minutes following Moore going public with the news, he and Texas running back commit Tristian Houston, for whom Moore blocks at North Shore, were asking Texas fans to do a Texas edit for Moore to use as his Twitter avatar. 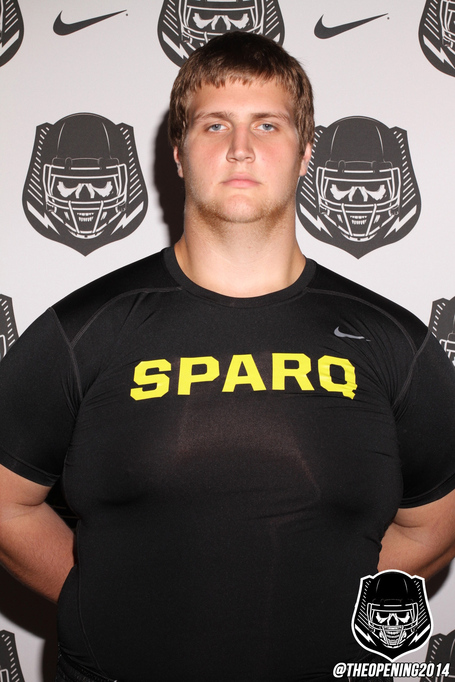 Tyler Moore in 2014 at a Nike SPARQ Combine (Student Sports).

At the same time, 247Sports recruiting analyst Brian Perroni was putting in his Crystal Ball prediction for Moore to Texas. Six more predictions for the Horns followed by early Wednesday afternoon.

A consensus low three-star prospect, Moore is ranked as the No. 73 offensive guard nationally and the No. 123 player in the state of Texas. Those rankings keep him outside of the top 1,000 players in the country.

Basically, there's not a lot of high-level competition for his services at this time.

Physically, Moore is at the opposite end of the spectrum from an offensive tackle like Arlington Bowie's Madison Akamnonu -- there's some bad weight there at 335 pounds, but he is a legitimate 6'4.5, as measured at the Houston NFTC this year. When he gets to college, he will probably need to spend some time trying to redistribute some of his weight, but he says that he has already done some of that and is down to 315 pounds.

However, that didn't stop offensive coordinator/offensive line coach Joe Wickline from extending an offer, as Moore has the type of mass that Wickline wants from at least one of his guards to hold the one-on-one blocks at the point of attack on inside zone since he likes his interior players to release quickly from their combo blocks.

The left guard for North Shore in their run-heavy offense, Moore is a remarkably wide and squatty player -- he looks shorter than his height as a result. As expected from someone with his build, Moore is effective pulling on Power and firing off the ball straight ahead and his combination of mass and lower-body strength makes him a difficult force to resist for high school players giving up a major amount of weight to him. When he gets his hands on opponents, the ballgame is basically over. In fact, he noted on Twitter that he had 72 pancakes as a junior.

He's not especially mobile -- he ran a 5.70 40 with a 5.09 shuttle at the Houston NFTC -- and probably isn't a strong candidate to get outside and work on screen passes, more the forte of a smaller potential classmate like Euless Trinity's Patrick Vahe. Getting to the second level on outside zone is a skill that he flashes on film and his movement ability on the whole is solid for someone of his size.

Texas already has three offensive line commits in the 2015 class and appears ready to take one more guard and one more tackle in the class. The competition for the guard spot for Moore is Many (La.) product Garrett Thomas, who has similar height, but weighs about 30 pounds less than Moore and is more highly recruited.

Based on the initial impressions from Moore following his offer, that spot may not be open for much longer, even as the Horns have surged in the Crystal Ball for Thomas.

There aren't many prospects on commitment watch for Texas right now, but put Moore squarely on it following his offer.