The 2014 Horns defensive line could have ended up looking quite different than it will this season.

Share All sharing options for: How Texas narrowly avoided losing their talented DL to Texas A&M

Heading into the 2014 season, the Texas Longhorns will lean heavily on senior defensive end Cedric Reed and junior Malcom Brown, while sophomore defensive tackle Hassan Ridgeway tries to convert some of his massive potential into production.

But Reed, Brown, and Ridgeway could have easily ended up wearing the maroon and white for the Texas A&M Aggies and perhaps would have done so in the current environment.

A look at their individual recruitments explains why.

In April of 2010, the Horns and the Aggies were battling for star Cleveland defensive end Cedric Reed, a relatively raw but long and promising 6'6, 245-pounder with more than 20 scholarship offers from around the country, including LSU, Nebraska, Notre Dame, Oklahoma, Stanford, and USC.

Reed, Brown, and Ridgeway could have easily ended up wearing the maroon and white for the Texas A&M Aggies and perhaps would have done so in the current environment

Announcing on his deceased mother's birthday, Reed cited the family atmosphere at Texas a major reason for his commitment to Orangebloods, but also told Inside Texas that he wanted to play for a national championship.

In what at the time still seemed like the glory days of Longhorns football, Texas was just coming off the title game appearance against Alabama.

Even after the disappointment there, the strong close to the 2010 recruiting class that featured the Five-Star Friday commitments of linebacker Jordan Hicks and defensive end Jackson Jeffcoat helped jumpstart the momentum for a 2011 class that came together with remarkable speed when Junior Days felt like Christmas and were orchestrated to the extent your parents orchestrated Christmas when you were a kid.

Remember when recruits actually seriously talked about the ability to win a national championship at Texas? It certainly feels like an incredible distance from flameout defensive tackle Taylor Bible's bold claim of four of them during his career and though the distance from more subdued claims about such wins isn't as great, it's significant nonetheless.

It's just not something that prospects who commit to Texas say any more and for good reason -- the narrative is about getting back towards the top, not summiting the mountain of college football.

At the time of Reed's commitment, however, the big defensive end was the 20th commitment in the 2011 class for the Horns about 10 months from Signing Day and he eventually finished as a four-star prospect by Rivals ranked as the No. 23 player in the state. In re-assessing those rankings, he would assuredly rank in the top 10. 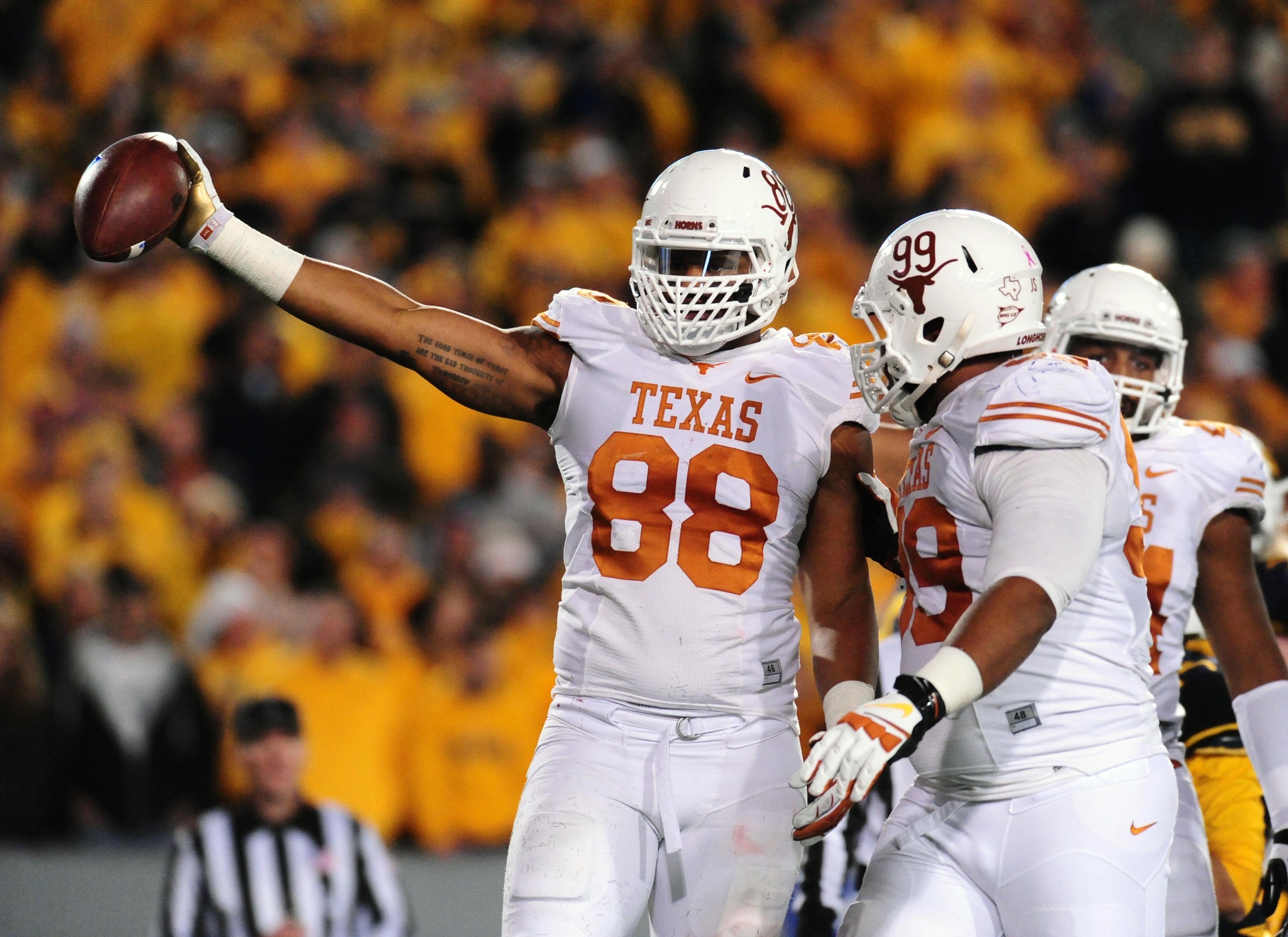 Fortunately for the Horns, continued struggles during the 2011 season didn't impact recruiting significantly in the class of 2012.

It wasn't easy, however, during the early days recruiting Brenham teammates Tim Cole and Malcom Brown. Both players took numerous visits to College Station and were considered pretty significant Aggie leans throughout the early part of 2011. In fact, it seemed like only a matter of time before both pledged to A&M, especially after Brown missed a Junior Day when his transportation fell through. 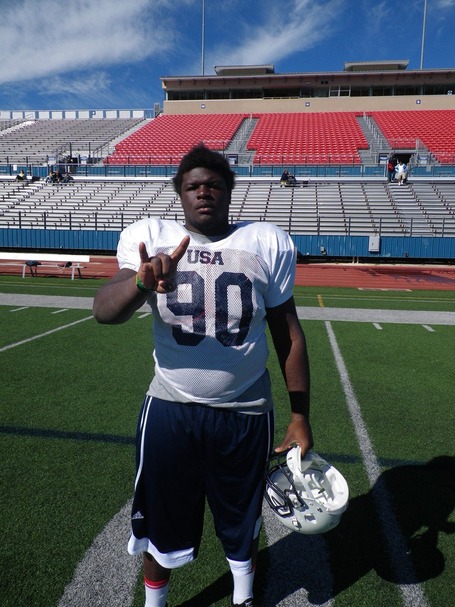 Brown was throwing his horns up right before NSD 2012 despite rumors he would decommit and sign with the Aggies (Wescott Eberts -- SB Nation).

But it turned out that Brown's ride issues were legitimate and the program grew on both players, with Brown announcing to his friend on the return to Brenham from one trip to Austin that he wanted to commit to Texas.

What happened? Brown told BON in early 2012 before he signed that when he was an Aggie lean, it was because he hadn't gotten out to see other places.

Just before the 2011 Orange-White game, the news broke that both players had ended their respective recruitments in favor of the Horns over the Aggies.

Rated as a consensus five-star prospect, 247Sports thought so highly of Brown that he was given a rating of 99. In the final Composite rankings, he was the No. 9 prospect nationally, the No. 2 defensive tackle, and the No. 3 player in the state of Texas.

Possessing both extraordinary quickness and size, Brown was also known for his motor, frequently chasing plays well downfield despite weighing 300 pounds or more throughout most of his high school career. Putting on his film, it was clear that football mattered deeply to him because there was more than just his incredible talent on display.

Then there was Mansfield defensive Hassan Ridgeway. Young for his age when the Horns decided to offer him in early 2011, he had just picked up an offer from the Aggies, but only took three days to commit after the first Texas Junior Day.

HIs recruitment was far from over, however, as the Aggies would remain persist in chasing the rapidly growing defensive end, whose physique by the Army All-American game had changed drastically -- even two and a half years ago, he was well on his way to his current weight of 300 pounds. 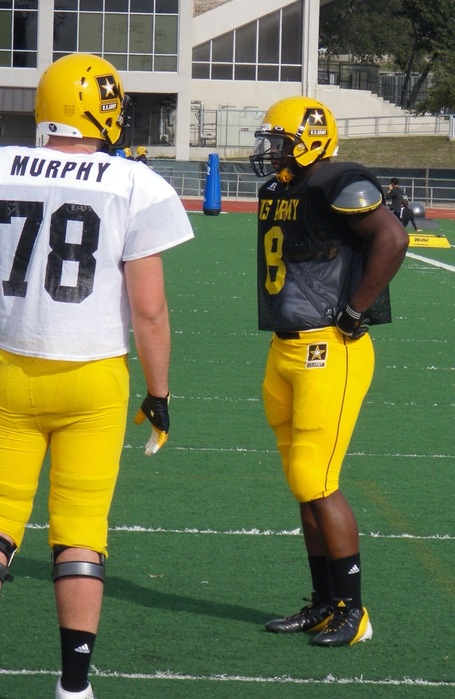 Ridgeway was a beast by the 2012 US Army All-American game (Wescott Eberts -- SB Nation).

At the time, Ridgeway denied his interest in A&M, but took a clandestine visit to College Station that included lying to some Texas reporters about what he was doing. In the end, however, he stuck with his commitment to Texas and signed with the Horns on Signing Day, but not before a major scare.

Had Reed and Brown decided to play their college football at Texas A&M, their prowess along the defensive line could have made a significant difference for a defensive unit that struggled mightily in 2013 and could do so again this season. Even Ridgeway could have played last year for the Aggies.

And what would it have taken to end up in Aggieland? New facilities? The family atmosphere recruits currently point to in College Station that recruits once saw in Austin? The move to the SEC? Johnny Football? One or two or three or all of the above?

What's apparent is that the current landscape is heavily favoring prospects choosing A&M over Texas, especially along the defensive line.

There's former Texas commit Daeshon Hall, who could be a breakout star this year after recording 29 tackles, two tackles for loss, and an interception as a true freshman. His loss was one of the reasons why the Horns completely missed at defensive end in the 2013 recruiting class.

There's former Texas target Myles Garrett, the defensive end who never gave the Horns the time of day in his recruitment, but was rated as the nation's top player last season by 247Sports. Perhaps Texas never would have had a shot at him in the old landscape, but the result is the same, all while the Horns only managed to land one defensive end in the 2014 class.

There's current A&M commit and Texas target Daylon Mack, the five-star defensive tackle from Gladewater who has been candid in talking about how he grew up a Texas fan. In some sense, he's the type of current-day Cedric Reed, an East Texas kid who grew up as a Longhorns fan but now sees more opportunity with the Aggies.

There's current A&M commit and Texas target Kingsley Keke, a defensive tackle with a similar build to Ridgeway who has significant potential.

At the time that Keke committed, that made two major in-state misses at a position of need. And while the addition of Cy Falls defensive tackle Du'Vonta Lampkin was extremely significant, much of the significance was tied to losing out on Mack and Keke.

Even in the best of times, the margins were remarkably thin for the Horns with some of the best defensive linemen in the state and now that margin has given way to a major advantage for the Aggies that will play out on the field in future years just as it has at Texas over the last several seasons.

But while the Horns wait to truly feel the effects of the current drastic shift in the recruiting landscape, there's still the equally powerful solace provided by the ability to watch Reed, Brown, and Ridgeway go to work under the new coaching staff on what could be the conference's best defensive line.