The Texas Longhorns volleyball team dominated Oregon in a 3 sets to 0 rout to claim its second national championship, and first since 1988.

Haley Eckerman, Bailey Webster, and a nearly flawless Longhorns volleyball team are national champions after thoroughly dominating the Oregon Ducks in a 3 sets to 0 sweep. Kills, blocks, hitting percentage -- Texas absolutely overwhelmed Oregon, who had been playing the best volleyball in the country heading in. From the opening point, they were no match for the Longhorns. No one would have beat the Gregory Gazelles tonight.

And that's why they are national champions. Hell of a match, hell of a season. Congrats to Jerritt Elliott, his staff, and all the Gazelles on a phenomenal season. Hook 'em... and CHAMPIONSHIP TEXAS! 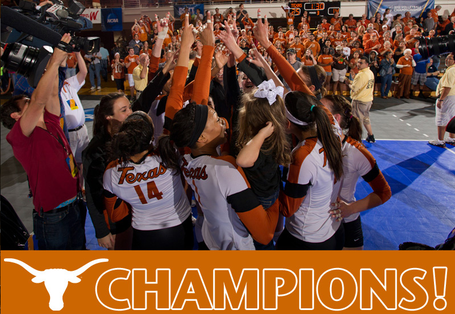